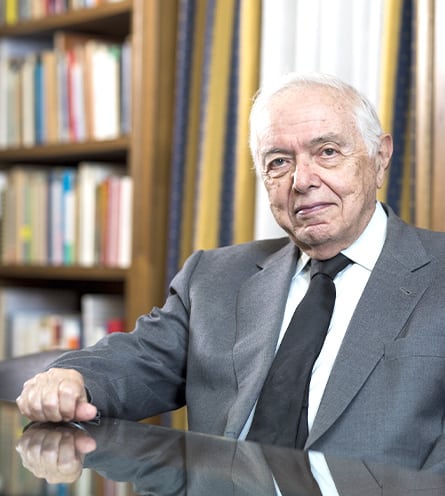 Nicolas K. Androulakis was born in Athens in 1933. In 1950 he entered the Law School of the University of Athens from which he graduated in 1955 summa cum laude and top of his class. He was admitted at the Athens Bar in 1959 and then continued his studies with a full scholarship of the State Scholarship Foundation at the Ludwig Maximilian University of Munich Law School, where he became Dr. juris in 1962. In 1964 he became a Fellow of the Alexander von Humboldt-Foundation and at the beginning of 1967, following his habilitation at the University of Athens, he was called upon to teach at the University of Saar (in Saarbrücken) as a Scientific Counsel (wissenschaftlicher Rat). He taught there for two years Special Criminal Law, Criminal Procedure and Courts’ Organization, and conducted the “major exercise in criminal law”, while at the same time he continued his research activities and published several books and articles in both Greek and German.

In 1969 he was elected Professor at the Law School of the University of Athens and in 1973 full Professor. Upon his return in Athens, he re-established Androulakis Law Offices and since then continued their expansion, with a major milestone being their movement to their current private premises in 1997. Professor Androulakis served as the Dean of the Law School and a Member of the Senate of the University of Athens (1977-1978), as well as the Director of the Department of Penal Sciences almost continuously from 1982 onwards. Under this capacity he established the postgraduate programme of the Department and supervised numerous dissertations.

From 1978 until 2015, for 37 consecutive years, Professor Androulakis was elected as President of the Greek Society of Criminal Law, the oldest and most prestigious scientific Association in its field. Between 1975 and 1980 he was the head of the Greek delegation at the European Committee on Crime Problems (CDPC) of the Council of Europe, and between 1998 and 2000 a Legal Counsel to the Greek Telecommunications Organization. In 2005 he was appointed President of the Legislative Commission for the drafting of a new Penal Code and in 2012 he was elected a full Member of the Academy of Athens. He was also a Scientific Advisor of the “Penal Chronicles” Greek Law Review and the “Journal for all Penal Sciences” (ZStW) German Law Review.

Professor Nicolas Androulakis was the leading authority in Greek criminal law for over half a century. He was widely acknowledged as such both in Greece and abroad, and his work is regarded as point of reference and has been repeatedly quoted in Judgments issued by the Supreme Courts in Greece and Germany. He was also recognized as one of the top criminal lawyers of his generation. In 2011, at a special ceremony organized in the Megaron Athens Concert Hall, he was honoured for his achievements by the Hellenic Criminal Bar Association, and in 2014 he was named Grand Commander of the Order of Honour by the President of the Hellenic Republic.

Back to all Members & Associates